HOME > Introduction of Natori > The History of Natori

The History of Natori

An abundance of history remains in Natori City.
・The Tumulus period in the 4th century: The famous “Raijinyama Kofun” is one of the biggest ancient burial mounds in Tohoku.
・During the middle of Heian period: several memorials honoring the court noble, Lieutenant General “Fujiwara Ason Sanetaka” who is said to be the model of the leading character in “The Tale of Genji”, still remain.
・The late “Heian” era: “Natori Kumano” Sanzan’s, “three Kumano Grand Shrines”; “Hongu”, “Shingu”, and “Nachisha” deities were ceremonially distributed to the northeastern foot of “Takadate” hills from their origin in Kii, which is now Wakayama and a part of Mie Prefecture.
・”Azuma Kaido”: A main road in the “Mutsu” region before “Ohshu Kaido” was built.
・”Ohshu Kaido”: One of the five main roads during the “Edo” period. Natori was a post town called “Masud”a along the road.
・”Teizan Unga” canal: The longest canal in Japan was built between the “Edo” period. and the “Meiji” period. 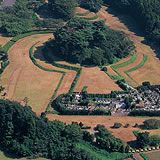 Since the early first half of the "Kofun" Tumulus period at the end of the 4th century, many tumuli were built, notably, the famous "Raijinyama-Kofun", Tohoku’s biggest ancient burial mounds. This is the only circular‐shaped ancient tomb with a square front; however, many other middle and small sized tumuli such as the "Iinozaka Kofungun", the "Jusanzuka Kofun", and the "Natori Otsuka Kofun" lead to tunnel tombs in the 7th and 8th centuries. 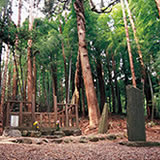 In the middle of "Heian" era (794–1185), a court noble, Lieutenant General "Fujiwara Ason Sanekata" was appointed as "Mutsunokami", the provincial governor of the Mutsu region. However, he died in front of the "Kasamatsu Dosojin" Shinto Shrine in Natori from falling off from his horse. It is said that he was the model of the leading character in "The Tale of Genji". There are many memorials in his honor; a headstone of "Sanetaka", a monument with a tanka poem inscribed by "Saigyo Hohshi" , the "Kasamatsu Dosojin" Shinto Shrine also known as the "Saeno Jinja" Shinto Shrine, and a stone tablet inscribed with a haiku poem by "Matsuo Basho". 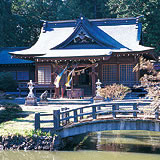 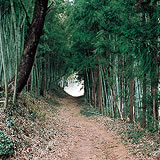 "Azuma Kaido" used to be one of the main roads in the "Mutsu" region before the "Ohshu kaido" was built. The road used to be called "Tousandou" in ancient times, "Okutaidou" in the medieval period, and then renamed "Azuma Kaido" in the "Edo" period. It ran through "Sengen", "Kitame", "Kasashima", "Shiote", "Minowa", "Kumanodou", across the Natori river, and finally to the regional government of "Taga". The route has changed accordingly with the era but there are many ruins and tales along the route. 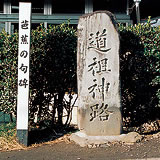 The "Ohshu Kaido" was one of the five main roads in the "Edo" era (1603–1868) in Japan. Starting from "Nihonbashi", "Edo" (Tokyo) to the north of Japan. Natori, a post town along the road for travelers, was called "Masuda-Juku". Also, there is a monument with a haiku inscribed by poet "Matsuo Basho", "Tatekoshi" Shinto Shrine, and an ancient burial mound "Raijinyama-Kofun" along the road. 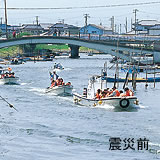 "Teizan" Canal was built between "Edo" and the "Meiji" era. The canal, approximately 60 km long, which is almost the half length of Sendai gulf (130 km), is the longest in Japan. It runs parallel along to coastline from the mouth of "Kitakami" river to the mouth of "Abukuma" river via M"atsushima" gulf. The canal in Natori is called "Kobikibori", which is useful for irrigation and controlling floods as well as being beautiful. Currently, the canal is being reconstructed after the March 11th, 2011 East Japan Earthquake & Tsunami. 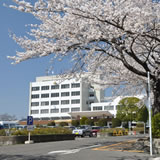 The Name of Natori City

The name “Natori county” first appeared in literature from the end of the 7th to the beginning of 8th century. From there, Natori was derived. Natori was officially founded as a city in 1958 with 382 households, and a population of 33,123. 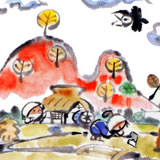 A group, which tells old folklore, was formed to pass the old tales among people onto the next generation through storytelling.