The revival and start of cherry trees from seedlings

Even though everything in the “Yuriage” area was washed away, the cherry blossoms bloomed in April, only a month after the tsunami. They were “Somei-Yoshino” cherry trees. It is said that all “Somei-Yoshino” trees are the descendant of one original tree. The way to produce a new cherry tree is to take a seedling from the branch of the tree, germinate it and nurse it into a young tree. We would like to produce new cherry trees to mourn the lost lives and activate the local community by planting new ones. We take some seedlings from the surviving cherry trees and nurse them into young trees, which we named “Natori’s Revived Cherry Trees”. These trees will watch over Natori as it gets rebuilt. (September 2011)

On September 7th, 2011, some branches of the remaining cherry trees were pruned to plant and raise new trees at the following places 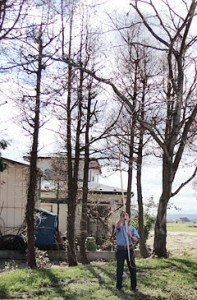 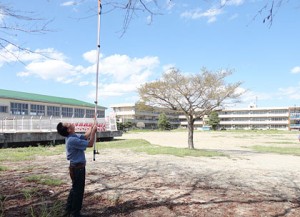 We started pruning the young branches of the cherry trees that have grown this year at “Yuriage” elementary school. 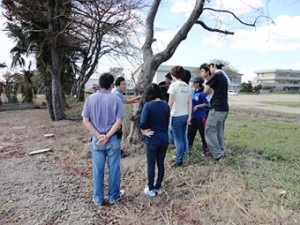 A lecture about young cherry trees by Mr. Hideaki Tanaka, representing the Flower Association of Japan, was given to the volunteer students, who were helping with the photograph revival project in the school’s gymnasium; the day that they came to see the pruning project. 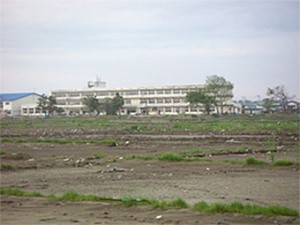 At “Yuriage” junior high school, many cherry trees used to surround the school yard, but only a few trees remained after the tsunami. 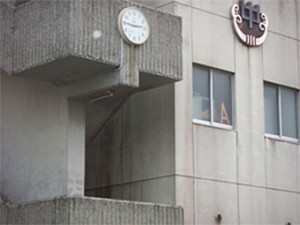 The clock on the North side of the school building stopped at 2:46 pm, the moment that the earthquake occurred. 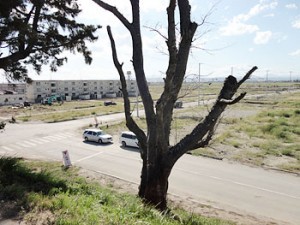 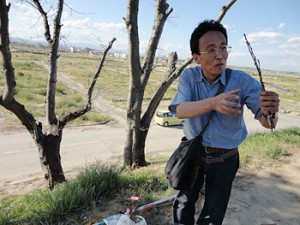 On “Hiyori” mountain, two cherry trees remain. One of them was weak, so we pruned some branches from the other one. The photo, above right, shows the branches we pruned. 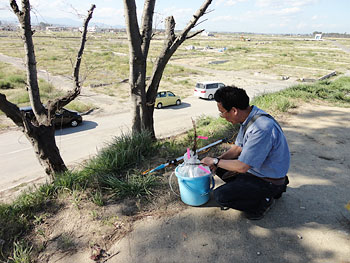 We asked the Flower Association of Japan to preserve the branches we cut in a damp condition and transport them to their firm in Yuki City, Ibaraki Prefecture.

We asked the Flower Association of Japan to take the branches we cut to their firm in Yuki City, Ibaraki Prefecture with wet condition to prevent being dry.

Method of growing young trees: You have to cut sprouts from surviving trees and graft them onto Oshima cherry trees to start a new branch. 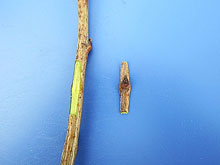 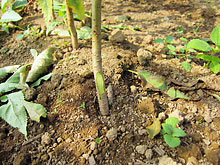 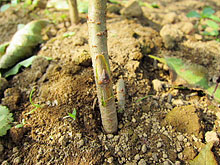 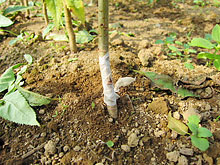 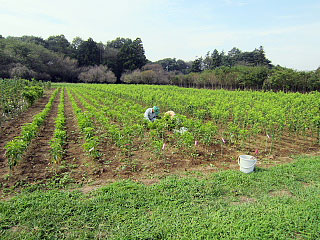 This project has just started. We hope that many young trees grow healthy and strong.