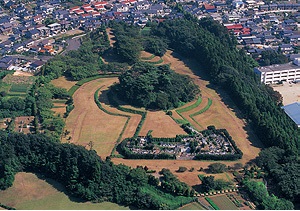 “Raijinyama-Kofun”
One of Tohoku’s biggest ancient burial mounds
The ancient tomb is a three-tiered structure covered with stones. It has been presumed from the features of the early tumulus that this burial mound was built sometime between the end of the 4th century to the beginning of 5th century. Some pot-shaped earthenware and vessels were excavated from inside; therefore, it thought to be the tomb of a chief of a powerful local clan who governed a considerably wide area. There is a small shrine dedicated to “Raijinyama-Kofun”, literally meaning the mountain god of thunder”, at the top of the burial mound. Currently, the tumulus is maintained as a historic park, and it is being cherished by many people of the public.